8 Comments
from the frontline

Police were not doing their duty at Barton Moss

At Manchester and Salford Magistrates’ Court on the morning of 9th May, PC Genge was on the stand. We watched video footage of him and other officers pushing people along Barton Moss Road. At one point Genge’s fist was in the small of a protector’s back. The day before, an officer two ranks above Genge said a fist in the back would constitute unreasonable force under the circumstances. Genge disagreed.

The circumstances were that protectors from Barton Moss camp, other anti-fracking activists and local people were doing the usual slow walk ahead of a convoy of trucks on their way to the IGas exploratory drilling site at the end of Barton Moss Road. On this occasion, unusually, the Tactical Aid Unit (TAU) and their ‘robust’ policing methods were unleashed on us almost immediately.

Within just a couple of minutes two arrests had been made – Rosie and Bear, both of whom had said they didn’t intend to do anything that would warrant arrest. Rosie was arrested by Genge; Bear by PC Sullivan. Fifteen minutes later I was arrested (perhaps because I didn’t follow an order to “walk through” the person in front of me). A few minutes later, Kate was on the floor in the mud being handcuffed by two officers (one of whom was Genge – he seemed to be everywhere that day).

That was 27th January. Fast forward to 8th May and the four of us arrested that morning were in court on charges of obstructing a highway and obstructing an officer in the course of their duty.

My arresting officer, Williamson, didn’t turn up – he was on holiday. So, my charges were dropped. Three months of traipsing to court, talking to lawyers, applying for legal aid, appealing against the decision not to give me legal aid, getting legal aid, making witness statements, searching through video footage, identifying and tracking down potential witnesses, swotting up on legal terminology, wasting time and energy… and then he goes on holiday and the prosecution drops the case.

For Rosie, Bear and Kate the charges of obstruct highway were dropped but obstruct PC was retained; and in each case the named PC was Genge. Not only did he seem to be everywhere, but he kept getting himself obstructed.

During cross examination Genge wouldn’t make eye contact with Rosie, who was defending herself and so had chance to question his actions. When she asked him to demonstrate how to walk forwards while pushing backwards, even the judge cracked a smile. When we watched footage of him violently grabbing and pushing Kate to the ground, a murmur rippled through the court. Rosie’s penultimate question was about Genge’s facebook post referring to “shoving protesters down Barton Moss Road” (he denied having made any such post), and her closing question was “Do you know that you’re widely considered to be a thug?” (I think that one was rhetorical, though entirely true – over the last six months, Genge had become notorious amongst Barton Moss protectors for his aggression.)

Bear’s barrister (Richard Brigden) and Kate’s solicitor (Emily Lloyd) clarified a few points and it became clear that despite paying lip-service to the facilitation of peaceful protest, Genge thought his primary purpose on 27th January was to get the trucks to the IGas site as quickly as possible. The judge reprimanded him for trying to evade questions. Despite this, he seemed confident. Over- confident.

The next witness was PC Sullivan, Bear’s arresting officer. We watched film of Bear attempting to de-arrest Rosie before being grabbed around the collar, hauled off and handcuffed. Sullivan – in stark contrast to Genge – made eye contact, smiled, thought about his answers and made a point of saying that Bear was not aggressive or hostile towards him. Sullivan was not kept on the stand for long.

Film: morning of 27th Jan including all four arrests

Next came barrister Richard’s half-time ‘surprise’. This sounded complex and convoluted, but in essence was exactly what we’d been saying all along. It went something like this:

Both prosecutor and judge needed a little time to check the lawbooks and case law at this point, so we had an hour of hanging around on tenterhooks before being called back to court. The prosecutor then requested an adjournment, on the grounds that no submission regarding this argument had been put to him in advance. An inaudible, invisible wave of despair washed around the room. No, no, let’s get on with it and get this over! We don’t want to be back here again next week…

Richard argued that little of what he’d said was genuinely new; that just as he’d worked it out for himself, so too could the prosecutor have done.

The room held its breath. Barton Moss Protectors are usually a rowdy crew but the eight or so crammed into the tiny public gallery were pin-droppingly quiet.

The judge said no. No adjournment.

The room breathed out.

The prosecutor turned on his smoothest, most melodious tone of voice. In that case, he would do his best with what he had.

He tried to make out that the use of force was reasonable, because regardless of the highway issue, we were in the way. He referred to the back-up of traffic on the A57, the dangers involved in allowing these heavy vehicles to back up, and the rights of the truck drivers to drive and deliver.

The judge said no.

I wasn’t sure I’d heard him right.

He said no, the force used was not necessary, not justified, not reasonable. The protesters were moving, albeit slowly. The protest was peaceful. No breach of the peace was imminent. There is a right to peacefully protest. There is no minimum speed limit for walking. Fracking is a contentious issue, protested against wherever it happens. The convoy was only delayed, not stopped for good. The obstruction on the A57 could have been dealt with by usual police procedures for such matters (and perhaps it was). Barton Moss Road was not a highway (though the officers may have thought in all good faith thought that it was). The TAU officers were not acting lawfully, they had no duty or right to push us, they were in fact assaulting us. We were not obstructing the highway, nor the officers in the course of any lawful duty. Case dismissed.

We were right all along.

We were ALL free.

What this means for future trials we’re not yet sure. The barrister was quick to point out that this isn’t a legal precedent that means all other cases will be dropped. Additionally, once it was confirmed in law that Barton Moss Road is not a highway, the police began arresting for Aggravated Trespass. Still, things are looking good for protectors so far.

The Salford Star has more reports of trials, cases dismissed and protectors found to be innocent. Plus, the possibility of an enquiry. 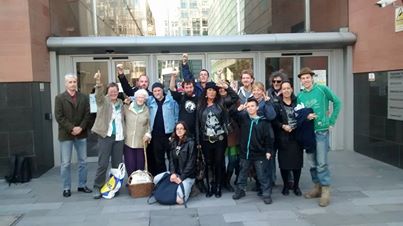